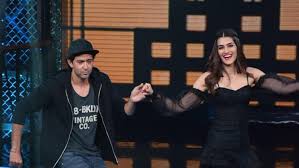 Kriti Sanon is consider one of the most promising actor of this generation. She has been praised by the audience as well as critics for her acting skills. Recently, there were rumors that Hrithik and Kriti Sanon have been approached for a project.

During a media interaction, when Kriti Sanon was asked about this rumor, she replied, “Ofcourse. I have said this in multiple interviews. He is someone I have been a fan of and I have had posters in my room of Hrithik and I have also met him and interacted with him. He is a great person.”
She further added,”  I hope that opportunity comes soon and I hope whatever rumour you are talking about, I don’t know which one this is, I hope it comes true.I think he is someone who is very inspirational in everything that he does, battling a lot things in his life in general and performing the way he does. So yeah I would love to do a film with him.”
Kriti Sanon never shy away to show her love for the actor. She mostly seen sharing her desire to work with him and also share how much she inspired by him.
On the work front, Kriti Sanon is gearing up for her next release ‘Mimi’ which is directed by Laxman Utekar and produced by Dinesh Vijan of Maddock Films. This film will hit the theatres this year.
rubbalchauhan March 24, 2020
Previous Article Karan Johar Planning to remake this Telgu film
Next Article Akshay Kumar appealed people to stay at home, and says “Please don’t be selfish”