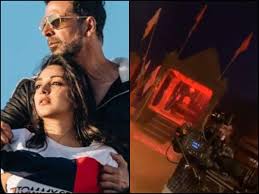 ‘Good Newws’ actors Akshay Kumar and Kiara Advani starrer ‘Laxmmi Bomb’ is one of the most awaited films of 2020. The first look of Akshay surprised everyone as he was seen sporting a saree and flaunting his kohl eyes. He will be seen playing the role of a transgender.

Today, a fan club of Akshay shared a video from the sets and it looks like that the team is shooting for the climax scene.

In the video, a temple can be seen which is similar to one where Akshay was seen posing in the first look. The climax scene is being shot in Mumbai. The fan club took to Twitter and wrote, “From the Set of #LaxmmiBomb Climax/Final Portion Shooting in Mumbai…#Akshaykumar #kiaraadvani @akshaykumar @advani_kiara @offl_Lawrence.”

Soon after this video was shared on social media, it has definitely left all the fans super excited for the release.

Recently, ‘Kanchana 3’ director Raghava Lawrence was all praise for Akshay. He even shared a picture with him on social media along with a sweet note. He wrote, “From Lakshmi bomb song shoot, I’m happy and proud to be working with the most hardworking, time punctual and down to earth Akshay Kumar sir and beyond all that a good human being.”

The film is all set to release on Eid 2020 and it will clash with Salman Khan starrer ’Radhe: Your Most Wanted Bhai’.