Dabangg from Bollywood Salman Khan is the most sought-after actor in the industry today. His hands are full of fascinating and big-budget films in the next years. ‘Kabhi Eid Kabhi Diwali,’ directed by Farhad Samji, will include Salman’s brother-in-law Aayush Sharma, Zaheer Iqbal, and Pooja Hegde in key parts. Salman will begin filming in the second week of May, according to the latest news about the project.You read that correctly! ‘Kabhi Eid Kabhi Diwali’ is expected to hit theatres later this month.
The Sultan star will begin filming at his favourite location, Mehboob Studio in Bandra, Mumbai, according to the source’s report. 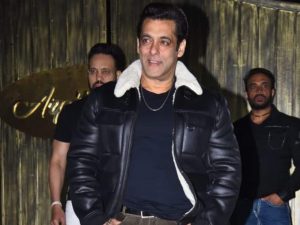 According to the source, the film’s crew and actors would also fly to Hyderabad to record another scene. Salman would finance Kabhi Eid Kabhi Diwali through his production company. Salman’s close friend and Bigg Boss 13 star Shehnaaz Gill is rumoured to be making her Bollywood debut with this movie, and she will star with Aayush Sharma.According to reports, the Bajrangi Bhaijaan star has not only requested Shehnaaz to decide on her pay, but has also granted her a flexible shooting schedule. Salman has even urged that the film’s shoot be scheduled around her schedule. Apart from that, the Kick actor has South superstar Chiranjeevi’s Godfather in the works, for which he will shortly begin filming. Salman is also preparing for the release of his upcoming action film ‘Tiger 3’, which he will star Katrina Kaif in. It will be released in April of 2023.
Salman has a huge and massive following. He is a mega-star and the King of box office. His action packed performances and movies are not less than a blessing to audience’s eyes. He is just the Heart-Throb and hence whatever project he does, gets in the eyes of the audience.