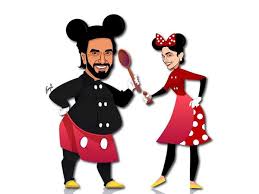 Ranveer Singh and Deepika Padukone have been indulging in a lot of social media things. After complimenting his wife Deepika  for a delicious meal, Ranveer took to Instagram to share a picture of himself and wife Deepika Padukone in which they are seen turning into Mickey and Minnie Mouse.

Ranveer wrote, “Dil ka raasta pet se hoke jaata hai.” The cute picture shows the superstars in a cartoon version of the popular kids show Mickey and Minnie. While Ranveer is seen holding a ladle, Deepika is seen holding a salt shaker in the photo. The caricature is perfect to show how the two actors are involved in the kitchen and making yummy dishes.

Earlier, Deepika had an interview with journalist Rajeev Masand during the lockdown period. Asked about her daily routine with Ranveer, she said, “I have to say, he’s the easiest person to live with in this scenario. He’s sleeping for about 20 hours, which really allows me time to do things that I want to do.” Deepika added, “For the four hours that he’s awake, we’re either watching a movie, eating, exercising. He’s a real joy to be with at this time. No demands, no hassles, he’s very easy.”

On the work front, Ranveer will be next seen in ‘Jayeshbhai Jordaar which marks the Bollywood debut of South actress Shalini Pandey. Deepika, on the other hand, will star in a new project soon co-starring Ananya Panday and Siddhant Chaturvedi. She will also be seen in a film with Rishi Kapoor.