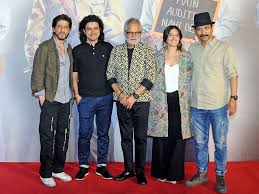 Sharukh Khan’s film ‘Kaamyaab’  author Paulo Coelho will be coming soon . The author shared a tweet, in which he was all praises for the film that stars veteran actor Sanjay Mishra and has been produced by Shah Rukh Khan. In his tweet, he wrote that the end of the film made him cry.

Mr Coelho shared the news of Brazilian actor Flavio Migliaccio’s death, who committed suicide and left behind a note about the treatment received by the artists in the industry. Sharing a poster of the film on Twitter and tagging SRK, Paulo Coelho tweeted: “The producers thank you in the very 1st frame, I am doing the same. 2 days ago a great Brazilian actor, Flavio Migliaccio, committed suicide, leaving a note on how the industry treats their artists. This movie, labeled as comedy, is, in fact, the tragedy of art.”

Shah Rukh, who produced the film, reacted to Mr Coelho’s tweet and wrote: “Saw the film when it was doing festival rounds and it touched a chord with the whole team at Red Chillies Entertainment. Am so moved you appreciate. It’s a sad truth that character actors get forgotten. Look after yourself my friend and be safe and healthy.”

Earlier this year, Shah Rukh Khan shared an image on Instagram and he wrote: “A small film with a big heart and some heart breaks. Hope it finds love from those who see it. All the best to the team and bas ab enjoy life aur option hi kya hai.”

rubbalchauhan May 7, 2020
Previous Article Sara Ali Khan Can’t Wait To Get Back To Work
Next Article Ranbir Kapoor and Deepika Padukone to reunite for Sanjay Leela Bhansali’s film ‘Baiju Bawra’?