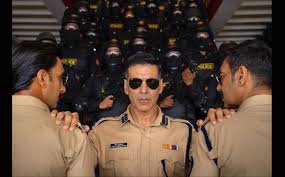 Filmmaker Rohit Shetty’s upcoming film ‘Sooryavanshi’ starring Akshay Kumar in the lead role is one of the most awaited films of the year. The makers of the film were about to unveil the trailer on February 27. According to the latest reports, the trailer release date has been pushed ahead. The trailer of ‘Sooryavanshi’ will be out on March 2. The film will release on March 27 but the makers of the movie are confident that a 25 day is enough for promotions.

Teaser posters of the movie have been building up the excitement levels amongst the fans. The cop-action film is all set to hit the theatres on March 27, 2020.

Meanwhile, on the work front, Akshay has his hands full with some very interesting projects which include, ‘Bell Bottom’, ‘Bachchan Pandey’, ‘Laxmi Bomb’ and ‘Atrangi Re’. Katrina, on the other hand, will be seeing in ‘Jewel of India’ which will release in 2021.