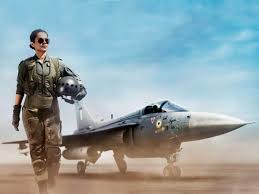 National award-winning actress Kangana Ranaut, who received crazy reviews for her performance in ‘Panga’. While Kangana already has ‘Thalaivi’ & ‘Dhaakad’ in her list, now another film starring her has been announced.

Kangana Ranaut has been roped in to feature in a military film titled ‘Tejas’ which is the story of a daring fighter pilot. The Indian Air Force was the first of the country’s defense forces to induct women into combat roles in 2016. The film will revolve around this landmark event.

Kangana Ranaut’s first look has been shared on the official Instagram handle of Kangana’s team with the caption, “For all the brave-hearted and strong-headed women in Uniform who make sacrifices for our nation day in and day out… Kangana to play an airforce pilot in her next, titled – #TEJAS ..#KanganaRanaut @team_kangana_ranaut #RonnieScrewvala @sarveshmewara @nonabains @rsvpmovies.”

The script of ‘Tejas’ is filmed to make audiences feel the rush that India’s brave soldiers experience on a daily basis, without once thinking of personal profits or needs. ‘Tejas’ also brings of what women can achieve when given a chance.

Written and to be helmed by Sarvesh Mewara, this is RSVP’s second film after Vicky Kaushal starrer ‘Uri: The Surgical Strike’ that salutes the forces and aims to inspire the country.

Whereas Kangana also shares, “Very often the sacrifices made by our brave women in uniform go unnoticed by the nation. ‘Tejas’ is a film where I have the honor of playing the role of one such Air Force pilot that puts country before self. I hope we instill a sense of patriotism and pride in the youth of today with this film. I am looking forward to the journey with Sarvesh and Ronnie on this one.”

rubbalchauhan February 17, 2020
Previous Article Ranveer Singh’s got trolled for golden outfit at the airport, calls him “Indian Lady Gaga”
Next Article Sara Ali Khan looks like a drooling image of mom Amrita Singh as she recreates the pose