After a successful partnership stretching decades, the most popular tennis duo Leander Paes and Mahesh Bhupathi are all set to hit the floors with letting the audiences know their side of the story in Zee5 original web series. The series is being created by Nitesh Tiwari and Ashwiny Iyer Tiwari for Zee5. 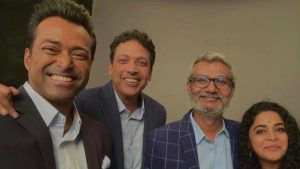 Popularly known as #LeeHesh, the duo took the internet by storm when they shared their 1999 Wimbledon win picture on social media and hinted at a possible reunion.

It has now been revealed that the India’s favourite tennis duo will be seen in a web series together after they shared the news on social media. Created under the supervision of ace directors Ashwiny Iyer Tiwari and Nitesh Tiwari, who are working together for the first time, the series is getting popular even before the release with sports buffs.

Sharing a picture of the duo with the directors, Leander Paes wrote in a social media post, “The incredible journey of my partnership with @mbhupathi, with its ups and downs is coming to your screens through the lens of this extraordinary filmmaker duo @ashwinyiyertiwari and @niteshtiwari22. Coming soon on #ZEE5. #LeeHesh.” In 1999, the duo had won the Wimbledon finals and in the same year the pair won French Open as well, making them India’s first tennis players to achieve this feat. Bhupathi and Paes became the first pair to reach the finals of all four Tennis Grand Slams in the year 1999.

On the 22nd anniversary of their Wimbledon win in the men’s doubles category, Leander Paes and Mahesh Bhupathi on Sunday hinted towards something special, sending the Twitterverse into a frenzy.

Nitesh Tiwari is an Indian filmmaker known for directing blockbuster films such as Dangal and Chhichhore, for which he won a National Film Award. Ashwiny Iyer Tiwari is also an ace director known for helming Bareilly Ki Barfi and Panga.