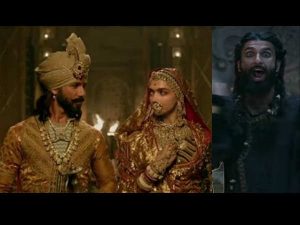 When asked to get an ostrich feather by his uncle Jalaluddin for his crown, Alauddin Khilji walks into the court with the living bird and seeks his cousin Mehrunisa’s hand for marriage in return for risking his life. He’s a man driven by power and flesh. Khilji soon killed his uncle to become the Sultan-E-Hind. On the other hand in the kingdom of Singhal, a free-spirited woman Padmavati (Deepika Padukone) loses her heart to Maharawal Ratan Singh of Chittor (Shahid Kapoor) when she accidentally ends up wounding the king with her arrow while chasing a deer in the forest. The  Eyes of two meet and it’s love at first sight followed by marriage. Later, an exiled priest from Mewar reaches the Delhi Sultanate and devises an evil plan to seek revenge from the Raja and his queen Padmavati for his banishment. He sings praises of Padmavati’s beauty to Khilji and plants a seed in his mind that he can rule the entire world only if the Rajput queen is by his side. Thus, the  Turko-Afghan ruler begins his plot to catch a glimpse of Rani Padmavati and capture her. 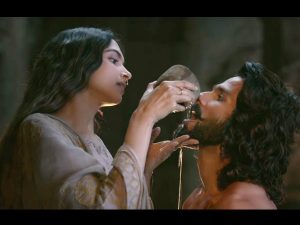 Direction
Whenever it comes to magnificence and opulent frames on screen, there is no one better than Sanjay Leela Bhansali to pull you into the world of visual story-telling. Padmavati is no different! It’s humongously erected on the scale of grandeur and leaves you in awe of its beauty. Unfortunately, the film suffers from some lethargic writing and fails to bring an emotional connection to the story. The snail-paced narrative especially in the first half makes it a tedious watch and leaves you with mixed feelings by the end. Where Bhansali wanting to pack in a series of events in the runtime of about 2 hours and 44 minutes, the romance between Shahid and Deepika remains unexplored and Khilji’s rise to power isn’t clearly spelled out. While the film tells the tale of popular folklore, the archaic idea of a woman committing ‘jauhar’ to save the ‘honor’ of her husband, and her people may be found questionable by a section of the audience, especially in today’s times. 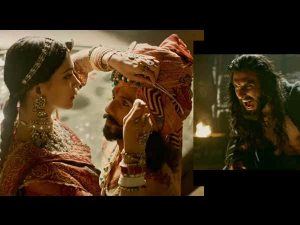 Performances
Deepika Padukone looks ethereal in every frame. Her eyestalks, whenever there are minimal dialogues and she plays the Rajput Queen with beauty, brains, and valor to perfection. Shahid Kapoor has brings a regal aura as the kohl-eyed Maharawal Ratan Rawal Singh who could even lay down his life for the ‘Rajputana aan baan aur shaan’. Though there are a couple of moments in the film where you feel he has underplayed his role and could have fared even better. And finally coming to the man of the moment- Ranveer Singh! You loathe, cringe and shudder at the mere sight of his Alauddin Khilji deliciously wrapped and delivered in one of his career-best performances. With his scarred face and kohled eyes, he sinks his teeth deep into his role, relishes and savors to unleash madness and terror on-screen. By the end of the film, you hate  Khilji to the extent that you fall in love with Ranveer Singh all over again. What’s commendable is that he plays Khilji’s dubious sexuality without over-exaggeration to point out that it’s the power that drives him- be it over a man or a woman! Jim Sarbh as the Sultan’s general slave Malik Kafur looks a little bit misplaced but he pulls up his socks to give his honest performance. Where Aditi Rao Hydari personality manages to leave a mark even in a small time frame. Anupriya Goenka delivers a decent act. 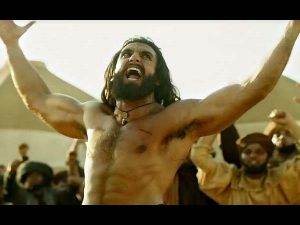