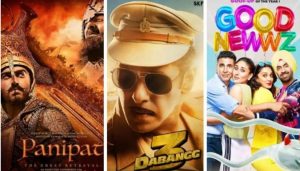 ovember is about to get over and we will soon step into December – the last month of 2019. From socially relevant films such as Ujda Chaman and Bala to masala entertainers like Marjaavaan, followed by the brainless comedy Pagalpanti, November brought many movies for cinema buffs, and each one of them held a different charm for the viewer.
So what’s on the big screen this December? We tell you the Bollywood films you should watch as the year ends. 1: PATI PATNI AUR WOH- Release date: December 6
Pati Patni Aur Woh is the remake of BR Chopra’s 1978 film with the same name. The original which featured Sanjeev Kumar, Vidya Sinha and Ranjeeta Kaur, turned out to be a classic and now, after a gap of nearly four decades, Kartik Aaryan, Bhumi Pednekar and Ananya Panday are stepping into their shoes to reprise the respective characters in the remake. Two of the songs in this version of Pati Patni Aur Woh are remakes – Ankhiyon Se Goli Maare and Dheeme Dheeme.
Coming to the star-cast, in case you are a fan of Kartik Aaryan and his monologues, thanks to Pyaar Ka Punchnama, you can surely book your tickets. And now that the makers have edited out the “balatkar” dialogue, cinephiles who had issues with it can also go to the theatres (only if you want to). Kartik will be seen in the role of Abhinav Tyagi aka Chintu, the Pati. Bhumi plays Kartik’s on-screen wife, Vedika, the Patni and Ananya will play the role of Tapasya, the Woh, his colleague. 2 PANIPAT- Release date: December 6
Another film which is releasing on December 6 is Arjun Kapoor and Kriti Sanon-starrer Panipat. In case you are a fan of period dramas or Ashutosh Gowariker’s style of filmmaking, you can give it a chance. However, you will get to compare Panipat with other historical films like Padmaavat and Bajirao Mastani. Go watch the trailer (and the trailer launch) of Panipat on YouTube and you will understand why.
Going by Ashutosh’s filmography, Panipat is expected to have a hard-hitting storyline based on the Third Battle of Panipat. But the star cast hasn’t really been appreciated by movie buffs. The feel of being in that era too is missing, some Twitter users pointed out after the trailer hit the web, unlike that of Sanjay Leela Bhansali’s Padmaavat and Bajirao Mastani.
Also, Pati Patni Aur Woh and Panipat are clashing at the box office, so you decide. 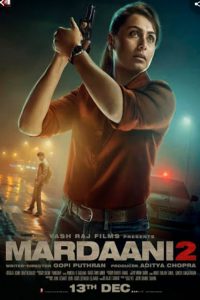 MARDAANI 2- Release date: December 13
Four years after Mardaani, Rani Mukerji is back with its sequel Mardaani 2. Rani is essaying the role of Shivani Shivaji Roy, a police inspector who has to arrest a 21-year-old serial rapist. The story is set in Kota, Rajasthan, which is termed as the ‘education hub’ because of its various coaching centres. The secret identity of the rapist and the disturbing scenes in the trailer will send a chill down your spine. The first scene where a girl student asking for a lift with a stranger, to Rani mouthing the dialogue, “I promise you, is rakshas ko main collar se ghasit-te hue, court tak le aaungi,” the whole trailer is rivetting and if it is anything to go by, the film looks promising.
Mardaani 2 has a solo release on December 13. Don’t miss it if you want to watch an action thriller this December. DABANGG 3- Release date: December 20
The list also includes Dabangg 3, the film shouldered by Salman Khan. The third installment of the famous Dabangg franchise will hit the screens on December 20 and Bhai’s fans will get to watch him in his Chulbul Pandey avatar the third time. Through Dabangg 3, fans will also get to know how he became Chulbul Pandey. The film is being called the prequel.
You will not get to watch a Munni Badnam or a Fevicol Se this time; Dabangg 3 will bring a Munna Badnaam instead.
Apart from Salman, Sonakshi Sinha, Mahie Gill and Arbaaz Khan will reprise their roles in Dabangg 3. The film will have new actors including Kiccha Sudeep and Saiee Manjrekar and Pramod Khanna among others. 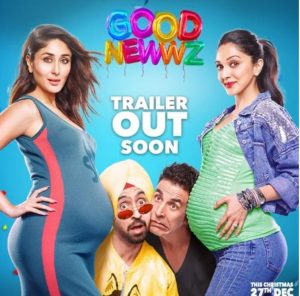 GOOD NEWWZ- Release Date: December 27
Starring Akshay Kumar, Kareena Kapoor Khan, Kiara Advani and Diljit Dosanjh, Good Newwz is “the biggest goof-up of the year” and seems like a perfect treat to watch in theatres. The film revolves around the lives of two couples (Varun and Deepti) and (Honey and Monika) who get involved in the process of In-Vitro Fertilisation. Unfortunately, the sperms get mixed up because of their same surname – Batras. Apart from funny punchlines, Good Newwz will also expected to act as an inspiration for childless couples to embrace the method of IVF.
Happy watching!