Katrina Kaif and Vicky Kaushal or as their fans call them #Vickat are indeed the most talked about couple of the B-town. Although, the rumoured couple have not made it official till now. But there has been so much conjecture about it, from teasing Vicky in The Kapil Sharma Show to Harshavardhan Kapoor spilling the beans about the beautiful couple in a talk show all the leads have directed towards them being in a relationship. 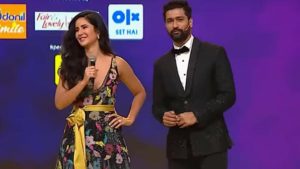 Recently, a rumour of them having a secret Roka ceremony sparked all over the internet and within a few minutes, everyone was talking about this alleged engagement ceremony. However, people closely associated with Katrina Kaif denied any such ceremony taking place and put a full stop to all the rumours. Now, a week later Sunny Kaushal, brother of Vicky Kaushal in a candid conversation revealed how exactly their parents reacted to the entire rumour. As revealed by sources, Sunny said, as soon as Vicky came from the gym mom and dad instantly asked him for “mithai” following the Roka rumours. This is not the first time Vicky’s legs have been pulled by his parents in his rumoured relationship. Vicky in an interview before revealed that his mother said to her once “aur Katrina Kaif ko date karne lagey ho aap toh” (Wow now you are dating Katrina Kaif).

The rumours of Vicky and Katrina dating started when they were first interviewed in a YouTube channel called “Tape Cast”. That particular episode not only has the most views but the comments are all about the couple’s undeniable chemistry and spark. The couple also has been spotted together in numerous affairs, like the Holi party, the movie screenings, and Diwali parties. But as we all know Katrina is extremely secretive about her relationships and she has always wanted to keep her personal life personal.