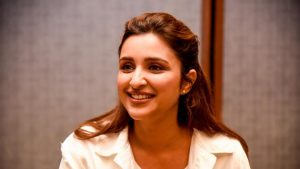 Actress Parineeti Chopra recently gave an interview in which she talked about marriage, love marriages, relationship and husband.  Parineeti Chopra also spoke on the issue of how boys are only in demand for a white girl.
In an interview to Asian Age, Parineeti Chopra said that she agrees with how people want only a white girl.  Because they understand that only a fair person is a better person.  She says that I am white and I like myself like this.  But I am not ready to believe that only white people are better.  The time is gone when all these things matter.  If these things are still in any part of India, then it needs to be changed.  There are different skin color people in India, so we are not entitled to say anything about whiteness.
Recently, news of Parineeti Chopra’s relationship was intensified in the media.  There were reports that he has a relationship with Charit Desai.  When asked questions about marriage, Parineeti says that I want to get married with the right person.  The boy should be perfect where both of us can understand each other better.
She further says that I am an actor and both my life and career are a bit complicated.  I want a boy who understands my life.  He loves me for me and not with the tag of an actor associated with me.
Only marriage is not everything.  If we are happy and in a good relationship then the need for marriage seems less.  I am a forward thinking girl.  But I believe in marriage.

Recently Parineeti Chopra has released the first look of her upcoming film ‘The Girl on the Train’ which is getting good response from the audience.  Parineeti Chopra and Siddharth Malhotra’s Jabari Jodi was released but it did not get much special response at the box office.