On Saturday, the trailer of one of the most awaited Punjabi movie ‘Puaada’ featuring Ammy Virk and Sonam Bajwa was officially released. 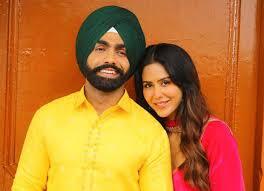 ‘Puaada’ trailer opens with a scene where Ammy and Sonam are seen sabotaging an arranged marriage meeting.  The trailer gives a glimpse of the storyline of the movie and establishes that Ammy and Sonam are lovers. It shows that the couple has kept their relationship a secret from their families and is keen to marry each other someday. The difference of their background comes in between of their plan to get married. Their families are opposite to each other as Sonam’s families values education above everything whereas Ammy’s mother wants to know if Sonam can do household chores or not. It can be clearly seen in the trailer that Ammy and Sonam have been true to their roles. Ammy’s comic timing is bang on and his dialogue delivery does full justice to the well written dialogues of the movie.

Puaada’s trailer is a full dose of comedy with the tint of romance. This is a proof that the movie will definitely take the audience on a roller coaster ride full of laughter. Puaada is the directorial debut of Rupinder Chahal. It is being produced by Atul Bhalla, Pawan Gill, Anurag Singh, Aman Gill, and Balwinder Singh Janjua. The movie will be hitting the silver screen on April 2nd, 2021.