On the occasion of Holi, Bollywood actress Radhika Apte announced her upcoming spy entertainer project ‘Mrs. Undercover’. The actress will be playing the role of an undercover agent in the movie. 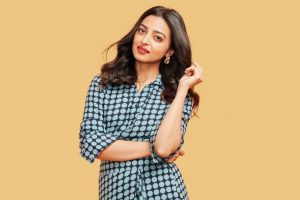 On Sunday, the makers of forthcoming movie ‘Mrs. Undercover’ revealed that Radhika Apte is onboard with the team of the movie. The movie will mark the directorial debut of writer Anushree Mehta who is happy to direct the film with Radhika in the lead.  Mrs. Undercover will also feature actor Sumeet Vyas.

Radhika took to her social media and shared the poster of the movie. The poster showed an Indian housewife dressed in a red saree carrying a revolver on her waist. The background of the poster shows Howrah Bridge. It seems like the story will be set in Kolkata.

While talking about the movie, the 35-year-old actress said, “Anushree came to me with this film some time back and the novelty of the story had me excited. When I saw this first look, it was that same excitement I felt and it was not only as someone who is a part of the film but also as a member of the audience. I think we all wanted to show the essence of the film through this first poster and I must say that we have captured it well. Now, I am waiting to see what the audience has to say about this special film of ours.” Debutant director Anushree said that it was surreal to share the first look of the movie. She said, “It is surreal to take this initial step and share the first look of our film with the world. We believe in giving quality content to the viewers and have tried very hard to achieve that with ‘Mrs. Undercover’. The title, the poster, the imagery is a long-thought process to make people excited. I am so glad that I found an actor like Radhika Apte to play the titular character.”

Abir Sengupta, who directed ‘Indoo Ki Jawani’ featuring Kiara Advani, has turned producer with the film. It is being co-produced with Ishan Saksena, Sengupta, Sunil Shah, and Varun Bajaj. Radhika Apte to play Indian housewife with a gun in spy...