The Mumbai police said, “Through investigation, it is clear that Mr. Kundra is involved in making nude and vulgar videos, uploads them on social media, and earns money.” He was arrested by the Property Cell of the Mumbai Crime Branch on July 19 in connection with the pornography racket busted in February. When the police raided a bungalow at Madh village in Malad on February 4, 2021, some young boys and girls were found filming and recording nude and vulgar videos and uploading them on various online platforms. Investigation revealed that these videos were going to be uploaded on a website and mobile app.

Actor Umesh Kamat confessed that Mr. Kundra is involved in broadcasting such videos on apps and has also made WhatsApp groups stay in contact with the app.

A witness told the police that Mr. Kundra and his close aide Saurabh Kushwah established Arms Prime Media Private Limited on February 5, 2019, and the said company sold the app to a company named Kenrin Limited for $25,000. On December 11, 2019, Mr. Kundra resigned from the company. The police said, “Through investigation, it is clear that Mr. Kundra is involved in making nude and vulgar videos, uploads them on social media, and earns money by establishing Arms Prime Media Private Limited which took over the app.” 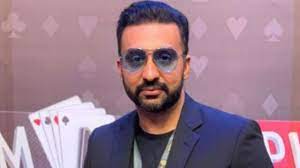 He has been charged with 354 C (voyeurism), 292 (sale, etc. of obscene books,), 293 (sale, etc., of obscene objects to young person), 420 (cheating and dishonestly inducing delivery of property) of the IPC along with relevant Sections of the Information Technology Act and the Sexual Harassment of Women at Workplace Act.