HIT- The First Case, starring Rajkummar Rao, has been into news since it’s inception. The movie will premiere in cinemas on July 15. Rajkummar Rao plays a cop in the movie who is looking for an abducted girl. And the plot takes a major turn when, Sanya Malhotra, the woman he was in love with, too vanishes. The trailer for the much anticipated movie, was unveiled by Rajkumar Rao himself. The trailer starts with a girl standing in the middle of the street. A police officer soon arrives to offer assistance, but she refuses. Later, she is abducted and goes missing, and Rajkummar Rao, who plays a police inspector, is deployed to search for her. The trailer shows the struggle that Rajkumar Rao faces as he is also dealing with Stress Disorder due to certain incidents happened in past and later his condition gets a little better when his love intrest Sanya Malhotra enters in his life. The romantic angle between Rajkumar and Sanya was also showcased. The most fascinating thing which caught everyone’s eyes is when Sanya goes missing and Rajkumar puts all his efforts to find her. The movie gives a glimpse of action, romance, suspense and thriller. The trailer definately left a strong impact on viewers and had left them in awe thinking what just happened. Fans are elated and excited to see the whole movie. 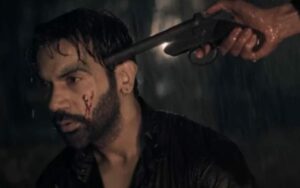 Directed by Sailesh Kolanu, the upcoming thriller is the Hindi remake of the Telugu film of the same title . The producers of this film are Bhushan Kumar, Dil Raju, Krishan Kumar, and Kuldeep RathoreIn. Rajkummar discussed about the movie and his character and said that he was elated as soon as he witness HIT. He further stated that through this movie he gets a chance to potray a character which is all new to him and he has been willing to do since a long time. He also expressed his gratitude to work alongside Sailesh and Dil Raju.