Rajkummar Rao’s upcoming film will be the Hindi adaptation of the Telugu police thriller HIT – The First Case. Today, June 17, saw the release of the movie’s teaser. Rajkummar is portraying a cop for the first time ever, and based on the teaser, the actor nailed the part in the crime drama. The movie’s female lead, Sanya Malhotra, portrays a police officer who is searching for a missing woman. Homicide Intervention Team is referred to as HIT.The creators of HIT – The First Case introduced us to the movie’s trailer after releasing Rajkummar Rao’s first-look photo. The captivating animation demonstrates how Vikram (Rajkummar Rao) balances his commitment to his career and personal life. He battles his personal demons while attempting to uncover the mystery of a missing woman. The teaser looks fascinating and full of miseries and suspense and thriller. 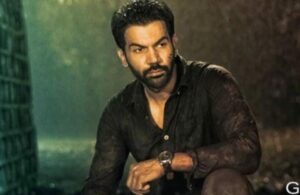 The new project excites Rajkummar Rao. The actor previously discussed being a member of HIT in a statement. He’d stated, “I was immediately drawn to HIT when I saw it. It’s an interesting tale that’s still applicable in the modern world. HIT provides me the opportunity to play personas I haven’t yet explored, which is something I’m constantly looking for as an actor. I’m excited to travel alongside Sailesh and Dil Raju on this trip. “The First Case is a remake of the 2020 Telugu hit whose title was same as the recent one. Dr. Sailesh Kolanu, who also oversaw the first movie, is in charge of this one. Vishwak Sen and Ruhani Sharma played the key characters in the Telugu movie HIT. In the movie, a police officer searches for a missing woman. Bhushan Kumar, Dil Raju, Krishan Kumar, and Kuldeep Rathore of T-Series are the financiers of the Hindi adaptation. The directors intend to give the Hindi adaptation a same twist on a bigger canvas because HIT is a huge investigative brand in the South.