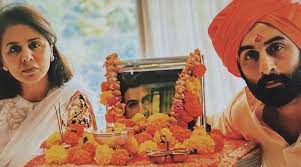 Late actor Rishi Kapoor’s  prayer meet was held on Tuesday  at Neetu Kapoor’s home in Bandra.  Rishi ‘s prayer meet was attended only by family members and a few of the Bachchans, the Kapoors’ family friends.

Rishi’s  son Ranbir, who is staying with girlfriend Alia Bhatt during the lockdown, arrived with the actor to be with mom Neetu and sister Riddhima at the prayer meet.

Randhir Kapoor, who arrived in a separate car, was escorted inside Neetu’s Bandra home by an assistant. Randhir’s daughter Karisma and wife Babita  also attended the prayer meet .

Karisma’s sister Kareena, who rushed to the hospital where Rishi Kapoor died to be with her family, wasn’t spotted at the prayer meet.