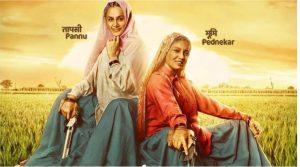 The much anticipated trailer of the year’s big Diwali release, Saand Ki Aankh has arrived and it is a refreshing change from the regular sports biopics. It gives a peek into the extraordinary journey of the ‘Shooter Dadis’: Prakashi Tomar and Chandro Tomar, played by Taap see Pannu and Bhumi Pednekar respectively. The two picked up guns and became sharpshooting champions at an age when others plan retirement.
Taapsee and Bhumi have put a brave foot forward by embracing wrinkles at an early point in their careers. Dressed in the traditional Haryana attire — shirt and ghagra with a dupatta covering the head — the two actors play sisters-in-law (Prakashi and Chandro) who realise their hidden talent at an advanced age. The trailer gives a glimpse of their lives as the homemakers who are ready to embrace old age. But how the sun shines again for the two and they go on to win medals appears to be an interesting tale.

It begins with how Taapsee and Bhumi’s characters come out to support their daughters who pick up sharp shooting as a sport but end up falling in love with it. How the women go on to achieve their goal together is an inspirational journey and has been brought alive on the silver screen.

However, the transformation of the two or their dialogue delivery doesn’t keep up as the two age. But as Bhumi says in the trailer, a woman doesn’t reveal her real age because she is unable to calculate the years she has lived for herself.

Filmmaker Prakash Jha makes an interesting appearance as Rattan Singh while Vineet Kumar Singh is also in a pivotal role. Director Tushar Hiranandani says, “Taapsee and Bhumi have both completely got into the skin of the dadis’ characters and given their 100% to their roles in the film.”