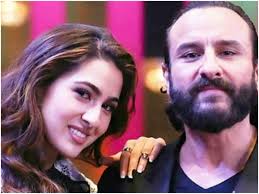 Saif Ali Khan has always made a clearance between his professional and personal life. Evergreen actor has delivered some noteworthy films. His daughter Sara Ali Khan is now following his footsteps and their fans just cannot wait for the father-daughter to share the screen space.

When asked if he has any plans to work with daughter Sara, Saif stated that he would love to work with Sara but it has to be a very special script as they both would like to avoid gimmicks. He also added that given the right director and script, it could be great.

Saif also added that he has always made a clearance between family and career. He also stated that he never thought that he should work with his wife Kareena Kapoor Khan or his mother Sharmila Tagore.

Saif had two releases this year in January which included, ‘Tanhaji: The Unsung Warrior’ which starred Ajay Devgn and Kajol in lead roles. The movie that hit the theatres on January 4, 2020, made a record collection at the box-office.

He was also seen in ‘Jawaani Jaaneman’ co-starring debutant Alaya F and Tabu. The movie also received positive response from the audience and critics alike.

Sara, on the other hand, will next be seen in ‘Coolie No. 1’ co-starring Varun Dhawan. She will be seen playing the role of Karisma Kapoor in the movie while Varun will be stepping into the shoes of Govinda.

Apart from this, she will also be seen in Aanand L Rai’s ‘Atrangi Re’ co-starring Akshay Kumar and Dhanush. She is currently shooting for the film in Varanasi.