Superstars from India’s greatest entertainment sectors, Salman Khan, Mahesh Babu, and Prithviraj Sukumaran, will unveil the teaser of Major in Hindi, Telugu, and Malayalam, respectively, in a collaborative effort to honour Sandeep Unnikrishnan’s memory. The makers of Major are set to release the film’s trailer at 4.59 p.m. today, Monday, May 9, after much anticipation, tracing the amazing and inspiring journey of the army officer and his fearlessness and selflessness in the 26/11 Mumbai terror attacks.
The celebrities from Bollywood, Tollywood, and Mollywood will gather together to debut the teaser, demonstrating the film’s immense size. Salman Khan and Prithviraj Sukumaran will premiere the trailer via their social media accounts in Hindi and Malayalam, respectively, while Mahesh Babu will do it at a special trailer release event in Hyderabad.
Major Unnikrishnan, a 31-year-old NSG Commando, was at the vanguard of the battle until his death on November 28. The video promises to provide insight into Sandeep Unnikrishnan’s life at various stages, giving the audience a better understanding of his absolutely awesome,epic and magnificient journey’s unwritten chapters. Adivi Sesh, who plays Sandeep Unnikrishnan, brings the heroics of the martyr to the film, celebrating the historic benchmarks of the army officer’s personal and professional life. 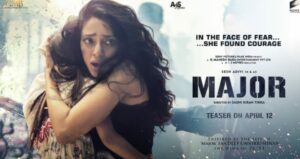