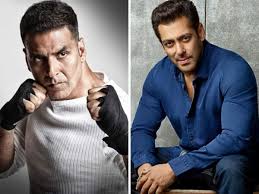 After having a heavenly 2019, Salman Khan is currently gearing up for his next movie ‘Radhe’: Your Most Wanted Bhai. The action drama has been making a lot of buzz ever since its inception.

On the other hand, Akshay Kumar is prepping for his pioneer movie with Rohit Shetty, ‘Sooryavanshi’ much to the excitement of the fans and Bollywood movie buffs.

‘Sooryavanshi’ was originally scheduled to be released on March 24, 2020. But the makers have now pushed its release date because of the ongoing coronavirus outbreak. Now, as per reports ‘Sooryavanshi’ is going to clash with Salman Khan’s ‘Radhe: Your Most Wanted Bhai’ at the box office. The Prabhu Deva directorial’s release date happens to be May 22, 2020, and now the makers of ‘Sooryavanshi’ are inspecting the same date for its release into the theatres.

‘Radhe: Your Most Wanted Bhai’ was originally expected to clash with the Akshay Kumar and Kiara Advani film ‘Laxxmi Bomb’ anyways. But, now the latest reports says, ‘Laxxmi Bomb’s’ release date will be pushed further and it will be replaced by ‘Sooryavanshi’.

On the other hand, Salman Khan’s film ‘Radhe’ also features Disha Patani and Jackie Shroff in the lead roles. Now, if the reports turn out to be true, it will be interesting to see which among the two movies will be able to win the hearts of the audiences.