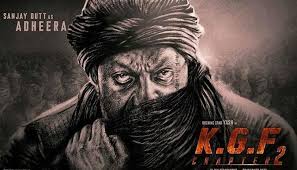 The makers of ‘KGF: Chapter 2’ announced the release date of the film on Friday. The film, which will stars Kannada cinema actor Yash, Sanjay Dutt and after a very long time break Raveena Tandon will also be seen in the film, which is slated to release on October 23, this year.

Sanjay Dutt, who features as the bandit Adheera, shared a new poster from the film on social media and he wrote: “Witness Adheera’s journey in cinemas near you as KGF Chapter 2 releases worldwide on October 23, 2020.” Meanwhile, the film’s lead actor Yash wrote: “KGF empire opens its gates for you this October 23. Chapter 2 hitting screens worldwide.”

On Sanjay Dutt’s 60th birthday, last year, Yash announced Sanjay Dutt’s partnership with the project on social media and he wrote: “Turning 60 hasn’t and will not stop this Khalnayak from charming us! Let your legacy continue. Happy Birthday, Sir. Welcome to the world of KGF.”

‘KGF’ was a Kannada period drama that demonstrates the journey of a man from the streets of Mumbai to the gold mines of Kolar fields.