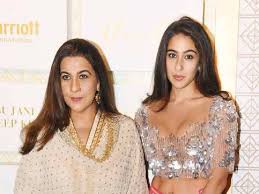 The very beautiful Sara Ali Khan made her Bollywood debut in 2018 and within a short span of time, she began ruling the hearts of the audience. Her utter beauty and brilliant acting skills are the main reasons behind the huge fan following. Sara is currently on cloud nine as she recently released movie ‘Love Aaj Kal’ is doing well at the box office.

Recently, the ‘Coolie No. 1’ actress has shared a picture on her Instagram handle which further proves that she is a drooling image of her mother. It happens to be a collage in which both Sara and evergreen Bollywood actress Amrita Singh can be seen dazzling a similar pose for the camera. While Amrita Singh looks gorgeous in a cream-colored saree, Sara looks no less in a pink beautiful lehenga.

Talking about Sara’s recently released movie ‘Love Aaj Kal’, it stars Kartik Aaryan as the male lead. The movie has been directed by Imtiaz Ali and is co-produced by Dinesh Vijan. It was released on February 14th on the occasion of Valentine’s Day.

Now Sara will be next seen in the movie ‘Coolie No. 1’ where she will be collaborating with actor Varun Dhawan. The comedy-drama has been directed by David Dhawan and is slated to be released on May 1, 2020.