Home Latest Buzz Sara Ali Khan Opts For Some Click-time In Goa As She Wraps... 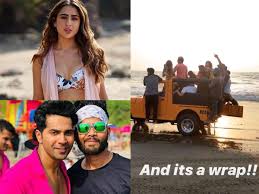 ‘Love Aaj Kal’ actress Sara Ali Khan and her hunky co-star Varun Dhawan have finally wrapped up the shoot of their romantic comedy ‘Coolie No. 1’ in Goa.

After spending long hours shooting, the two stars were happy to announce that they have officially completed work on the project. “Hello guys, and that is a wrap on ‘Coolie No. 1” Sara gladly announced on social media post that also featured the crew members. The actress was even seen giving her fans a goodbye kiss.

Meanwhile, Varun, on the other hand, poses with his crew members. Varun and Sara headed to Goa to shoot a romantic song sequence for their film ‘Coolie No 1’.

Just hours before completing the shoot, Varun shared that he has got a minor injury. He posted a video of himself seeking first aid.

Sara made the most of her last day on the sets, by posing for a breathtaking sun-kissed shoot that saw her posing in a floral bikini with her hair down in loose curls.

The remake of the film will mark the director David Dhawan 45th film in Bollywood. The movie also stars ‘Pir Hera Pheri’ actor Paresh Rawal, ‘Judwaa 2’ actor Rajpal Yadav and Johny Lever who last year was seen in the movie ‘Housefull 4’ and others.

The David Dhawan directorial which is a remake of the original 1995 film that starred Govinda and Karishma Kapoor, is slated to release on May 1, 2020.