The famous celebrity Salman Khan again embroiled in a controversy when he was busy in shooting of Dabangg 3 in Maheshwar MP. Suddenly one picture from the set surfaced on social media. The pictures of a Shivling covered with wooden planks gone viral on the internet, which has caused a big problem for him.The film’s set was created near river Narmada in Maheshwar.

On this controversy, Harsh Dave the line producer took to his twitter and said: “We had constructed the perimeter for the Shivlinga and had positioned two people on the side to guard it and avoid people from walking on it. We had no intention of hurting anyone’s religious sentiments and we have relocated the set. 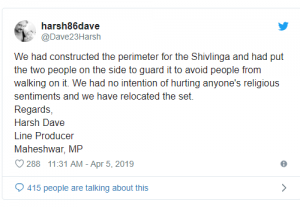 This controversy has caused a war of words between the ruling party and Congress.