In this trend of sports films and biopics , Ajay Devgan is all set to give his fans a big surprise. Yes! you red that right Ajay Devgan will also make a sports film. Moreover, the name of the movie is ‘Maidaan Kicks Off Today’ 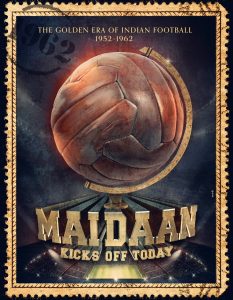 The first look of this movie is also revealed. Ajay Devgan shared this poster on his social media account with his fans.With this first look Ajay also informed that the shooting of this movie is started. It will be the first ever sports film of Ajay. Ajay’s fans are eagerly waiting for his movie. You can check out the comments of Ajay Devgan’s fans oh his post. This film will be directed by Amit R Sharma who has directed successful movies such as ‘Badhai Ho’.Apart from this, Ajay Devgan will be seen opposite to National Award winner South Indian actress Keerthy Suresh .With this movie Keerthy Suresh will debut in Bollywood. Maidaan will be a period film and based on the ‘Golden Era of Football’ from 1952 to 1962.

The interesting fact in this movie is Ajay Devgan is a ‘National Award Winner’ and Keerthy also got National Award in 2018. Beside this, not only star cast but Amit R Sharma directed film ‘Badhai Ho’ also won National Award recently. So, we can see the lethal combination of these three super-talented persons.