Shraddha Kapoor is rumoured to be in a relationship with photographer Rohan Shrestha. They have been seen together on several occasions. And it now seems that they are about to take the next step. In an interview to India.com, Shraddha’s cousin Priyaank Sharma and her aunt Padmini Kolhapure gave us a hint.

When asked about their shaadi plans, Priyaank said, “I am going to say no comments, main kya bolun yaar (what should I say now). But yes, if you say looking forward to it, then obviously, weddings are good to look forward to. The more the merrier, why not!” On the other hand, Padmini said that we will come to know whenever it happens. “Marriage, wow! That’s a strange question (she too giggled) agar waisa hoga toh khabar mil jaigi (if she plans to get married, you’ll come to know).”

Neither Shraddha nor Rohan has confirmed the relationship yet. In a past interview with The Quint, when Rohan was asked about reports of their link-up, he had said that they have been extremely close for the last 9 years. He added that they had met at a party and instantly hit it off. While he had denied being in a relationship with her, he had added that he has been seeing someone over the last few months. 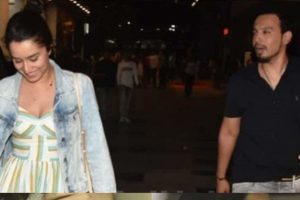 Rohan had taken to his Instagram stories to wish Varun Dhawan after he got married to Natasha Dalal this year. “Congratulations VD and Nats. When you know you know! VD you’re a lucky guy!” Replying to him Varun had indirectly hinted as his shaadi. “I truly am. Hope you’re ready,” Varun wrote.

Meanwhile, on the work front, Shraddha will be seen in Luv Ranjan’s next film which also stars Ranbir Kapoor.

“Her Presence Calms Me”: Sharmila Tagore Is All Praises For Her...