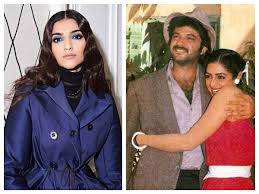 The remake of Anil Kapoor and Sridevi’s film ‘Mr. India’ was the talk of the town a few years ago. Now, it has been confirmed by filmmaker Ali Abbas Zafar. Ever since Ali announced the news on Twitter, there have been a lot many speculations about the film. Director of the original, Shekhar Kapur recently also expressed his displeasure over the remake as neither he nor Anil Kapoor was informed about the same.

Now, Anil’s daughter Sonam Kapoor Ahuja has expressed her disappointment over the remake and called it a ‘disrespect and underhanded’.

Original film director Shekhar had earlier shared on twitter, “No one has even asked me or mentioned to me about this film called Mr. India 2. I can only guess that they using the title to get a big weekend. For they cannot use the characters/story without permission from the original creators of the film.”

Alia Abbas Zafar had excitedly announced his ‘Mr. India 2’ on social media on February 17. He wrote, ‘Excited to partner with @ZeeStudios_ for an epic trilogy #MrIndia! It is a huge responsibility to carry forward an iconic character loved by everyone.”

The film will feature Ranveer Singh where he will be stepping into the shoes of Anil Kapoor and Shah Rukh Khan will play the iconic role of Mogambo.