On Tuesday, the makers of Nyaay: The Justice dropped the teaser and poster of the upcoming film which is said to be a tribute to late actor Sushant Singh Rajput. While sharing the teaser on twitter, the makers wrote, “An exceptional talent gone too soon. How? Why? are just some of the questions on everyone’s mind. Will all be revealed? Nyay: The Justice coming to all your theatres on 11th June, 2021. #NyayForSSR #NyayTheJusticeTeaser”

An exceptional talent gone too soon. How? Why? are just some of the questions on everyone’s mind. Will all be revealed? Nyay: The Justice coming to all your theatres on 11th June, 2021. #NyayForSSR #NyayTheJusticeTeaserhttps://t.co/C0eMFIaT4R@dilipgulatidg9 #RahulSharma pic.twitter.com/UOF5hMJbN6

The teaser of the upcoming movie opens with the news of a popular actor Mahinder Singh’s suicide at his house. It gives a sneak peek into his life and shows how India’s 3 of the biggest investigation agencies are working to find out whether his death was suicide or planned murder. Touted to be based on true events, the movie features Zuber Khan and Shreya Shukla in main lead. ‘Nyaay: The Justice’ will delve into the unanswered questions that the country is waiting to know. The film also stars Aman Verma, Asrani, Shakti Kapoor, Somi Khan and Sudha Chandran in pivotal roles. The movie has been directed and written by Dilip Gulati. Gulati said, “I was shocked to learn about his (Sushant Singh Rajput) death. Though I do not know him personally, we all felt for him. Through this film we want to send out a message that taking your own life is not the right thing to do, there is always another option. This film is a tribute to him and we hope that this film helps to celebrate him and his work.” 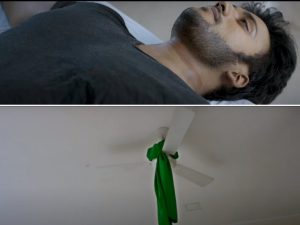 Nyaay: The Justice has been bankrolled by Sarla A. Saraogi and Rahul Sharma. Talking about the movie, Saraogi said, “We are making this film not to ride on his fame or success, we hope that this film celebrates his journey and reignites the spark to seek justice for a lost son.”

‘Nyaay: The Justice’ is scheduled to release on 11th June this year.

Taapsee Pannu donates platelets to an elderly-women, gets praised by Tillotama Shome