Short film Sheer Qorma starring Shabana Azmi, Swara Bhasker and Divya Dutta- has won Best Short Film Audience Award at the Frameline Fest. The movie has also qualified for the BAFTA this year. This is a major boost to Indian films on the LGBTQ society. Actress Swara Bhasker took to twitter and shared the news with her fans. She wrote, “WE WON THE BIGGEST QUEER FILM FESTIVAL IN THE WORLD! HUGE!!! #SheerQorma becomes the 1st Indian film to win @framelinefest in the festival’s 37 years!!! #SheerQorma wins @framelinefest— the #BAFTA qualifying, longest running, largest l queer film exhibition in the world!”

Helmed by Faraz Arif Ansari, ‘Sheer Qorma’ is a romantic drama which shows how love is judged in the society based on gender. It tells the audience about the people’s preconceived notions about sexuality. Actress Swara Bhaskar plays the role of a Pakistani-Canadian citizen who travels to India with her lover (Divya Dutta). However, Divya’s mother
(played by Shabana Azmi) finds it difficult to come to terms with her daughter’s choices.

The Faraz Arif Ansari directorial was screened at the Frameline Fest as part of the Enby Love shorts program. Recently, the film also won the Best Short Film, Audience award at the 34th Connecticut LGBT Festival. 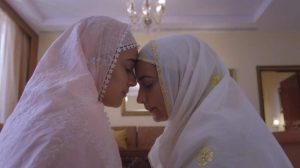 Director Faraz talked about the film and said, “The character that Shabana ji essays in Sheer Qorma is going to not only resonate with mothers all across the world but will also open a much needed dialogue about parenthood, and with not just parents of queer children but a more universal dialogue that I hope will bring a lot of love back in our universe. Shabana ji’s character in Sheer Qorma is the mother we all deserve.”

Sheer Qorma is yet to release in India.