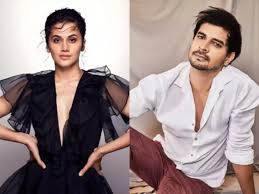 ‘Badla’ actress Taapsee Pannu has announced that she will be part of a Hindi
remake of ‘Run Lola Run’, which is being directed by Aakash Bhatia. The film
will also star Tahir Raj Bhasin who had done movies like, ‘Chhichhore’, ‘Force
2’, ‘Mardaani’, and is set to hit theatres on January 29, 2021.

Sharing the information on social media, Taapsee wrote, “Right, so here’s yet
another announcement from my stable. I’m on a roll. Or shall I say in a loop?
Stoked to announce Sony Picture India and Ellipsis Entertainment’s crazy
thriller-comedy, “LOOOP LAPETA”, an adaptation of the cult classic “Run Lola
Run.” Looking forward to the roller-coaster with my director Aakash Bhatia, my
co-star, Tahir Raj Bhasin and the amazing folks at Ellipsis Entertainment (Tanuj,
Atul) and Sony! Mark your calendar for 29th Jan 2021.”

‘Run Lola Run’ is a 1998 German thriller film written and directed by Tom
Tykwer he had done movies like, ‘Heaven’, Netflix series ‘Sense 8’. The film
starred Franka Potente and Moritz Bleibtreu. The film follows a woman who
needs to obtain 100,000 Deutsche Mark in 20 minutes to save her boyfriend’s
life.

Meanwhile, Taapsee awaits the release of her film ‘Thappad’ where she plays a
wife who is not ready to treat violence as a norm. The film is set to reach big
screens on February 28 this year.