Tandav, the most talked series these days is finally out on Amazon prime. It begins well, giving us a refreshing father-son equation. When we first come upon Devki Nandan Singh (Tigmanshu Dhulia), he is looking at Samar Pratap (Saif Ali Khan) as only a dyed-in-the-wool ‘neta’ can however the latter may be his ‘beta’, but Samar is also Devki’s strongest rival. Through that single glance,one  comes to know that these two may be united by blood, but are divided by their ambitions. And so when blood is spilled, we are not surprised. The act launches the series into quite predictable arcs, where we can see what’s coming from miles off. 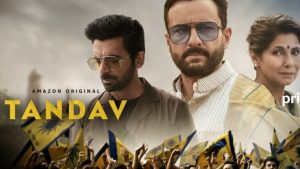 This a great, varied ensemble: Dimple Kapadia as the power-hungry Anuradha Kishore, Kumud Mishra as senior party leader Gopal Das, always the bridesmaid, never the bride, Sunil Grover as Gurpal, Samar’s ruthless yesman, Gauhar Khan as Maithili, the canny woman behind Anuradha, Anup Soni as Kailash, the lower caste leader who knows the value of holding on to anger. And on the other side, Zeeshan Ayyub as dynamic student leader Shiva Shekhar, Kritika Kamra as his complex compatriot Sana, Sandhya Mridul as a feisty professor, Dino Morea as a two-faced bridge between the two sides. 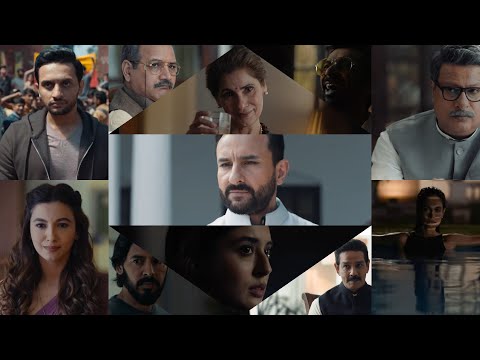 Given this, Tandav should have been much smarter, and much more interesting. What floats up top is the deep distrust between family members of politicians, as does the curse of ambition– to live with no peace, always worried about someone stabbing you in the back.

Saif Ali Khan has moments, but comes off too Bollywood-familiar, as does Kapadia, clad in the most lovely saris: both are capable of so much more. Those who rise above the pedestrian writing are Grover , Gauhar Khan and Sandhya Mridul, and Tigmanshu Dhulia, who infuses his part with real brio, and is the best part of the show. Whatever punch there is comes from the ‘netas’ and their plotting. The portrayal of the students, their in-fighting-speeches-campaigns, never really lift off the screen; neither does, even more surprisingly,

Zeeshan Ayyub, usually so good. Disappointing that this goes the way it does. The way it ends, though, is clearly not the end as second season season is on its way….Can the second season be sharper, an actual ‘tandav’?