The year of Ranbir Kapoor’s comeback is starting to take form. The long-awaited first trailer for the interpretive epic Brahmastra was recently released by Dharma Productions. On Wednesday, Yash Raj Films released the first teaser for the historical drama Shamshera, which will be Ranbir’s first movie since 2018’s Sanju. The first shot of the minute-and-a-half-long trailer may serve as a reminder to viewers who saw  Immortan Joe’s treatment of his subjects in Mad Max: Fury Road. Sanjay Dutt plays the adversary in the movie Shamshera, and his entrance is heralded by some manic laughter. In the recent smash film KGF: Chapter 2, Dutt starred as a villain; he was also a part of Samrat Prithviraj. Although the teaser doesn’t give away much about the story, it does convey an idea of the main struggle. Dacoit Shamshera, played by Ranbir, leads his ‘tribe’ in an uprising against Dutt’s villain. The character is portrayed leading the way across vast deserts while brandishing a pickaxe in opposition. 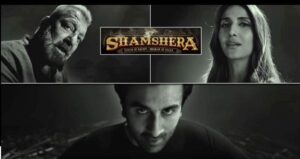 He is projected as some sort of messiah-like figure.The film’s breadth and the CGI scenes that Malhotra and his crew have created are also alluded in the teaser. Shamshera’s tone seems to be a cross between an old-fashioned Western and an action epic from the 1970s. Well it is to be noted tha Ranbir Kapoor potrayed Sanjay in his biography titled Sanju and now both of them are finally collaborating together.
Well YRF’s Jayeshbhai Jordaar and Samrat Prithviraj did not do so well on box office and Karan Malhotra has not made any movie since 2015 and this may also be the reason of tension and a matter of concern for YRF. Shamshera reportedly cost Rs 150 crore to produce and also features Vaani Kapoor, Ashutosh Rana, and Saurabh Shukla. By subtitling the movie in Tamil, Telugu, and Kannada, YRF is attempting to position it as a pan-Indian experience. On July 22, the movie will also be presented in IMAX.

After 26 years, Lucky Ali and Mickey McCleary to reunite with a full series...