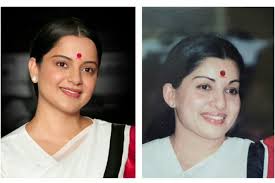 On the occasion of the 72nd birth anniversary of the late political leader Jayalalithaa, the makers of ‘Thalaivi’ released a new look from the film. Recently, the makers shared a new picture, in which the ‘Tanu Weds Manu’actress Kangana Ranaut can be seen dressed as Jayalalithaa.

She can be seen wearing a white saree, a red bindi on her forehead and a warm smile. Sharing the look from the film, the actor’s team on social media, wrote: “Revealing Kangana’s look from the film ‘Thalaivi’ on the occasion of 72nd Birth Anniversary of Jayalalithaa. The film is based on the story of the life of J Jayalalithaa, and touts to shed light on the lesser-known aspects of her life.”

Speaking of her transformation into Jayalalithaa, Kangana had told in an interview last year that she had to take “hormone pills.” Kangana also stated, “Since I am tall and skinny, and my face is angular, not round, I had to take mild doses of hormone pills to look different. Of course, I also started eating foods that promote weight gain.”

The film will release in Hindi, Tamil, and Telugu on June 26, this year.

On the professional front, Kangana was last seen in Ashwiny Iyer Tiwari’s sports drama ‘Panga’. The actress also has Sarvesh Mewara’s ‘Tejas’ in the pipeline, in which she will play an Air Force pilot.