From the day ‘Vikram Vedha‘ the aspiring project has been declared, the audience have been overjoyed and delighted. For all the Hrithik Roshan fans it is really exhilarating to know that he is going to play the role of Vedha. Audiences have been impatiently waiting for a long time to know just a bit as not much has been disclosed about the film. Al right, so get ready for some revelation which you are going to get on the Actor’s birthday. The  makers of the movie have clearly made up their mind to reveal the first look of the actor tomorrow.

Nawab of Indian cinema Actor Saif Ali Khan will be seen as well alongside Hrithik Roshan, in a very important role. Apparently, the first shooting for Vikram Vedha was done in Abu Dhabi, Dubai. Henceforward Actor Saif Ali Khan has ended his shooting in Lucknow which went on for nineteen days. Actress Radhika Apte will also be seen acting for a crucial role in the film. According to sources this is a recreation of the 2017 Tamil language hit Vikram Vedha produced by well-known producer and writer Gayatri and Pushkar and starring Actors like Vijay Sethupathi and R. Madhavan.  Gayatri and Pushkar are also navigating the Hindi language Bollywood transformation . 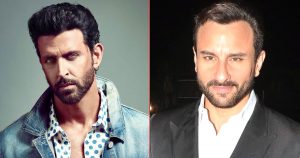 The movie, neo-noir action thriller constructed on the Indian traditional story ‘Vikram aur Betaal’, notifies the tale of a strong cop who is all ready to discover and destroy a similarly strong hoodlum.

Bollywood Actor Hrithik Roshan will be turning 48 tomorrow and all his fans are already very excited for his birthday. He is also ranked no 4 because of his good looks and attractive nature.  Actor Saif Ali Khan was also seen in the movie ‘Bunty Aur Babli 2’ which is directed by Aditya Chopra. This movie is a recreation of the 2005 ‘Bunty Aur Babli’.