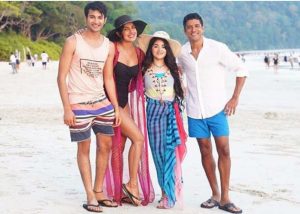 Priyanka Chopra was happy to announce that she is heading over to Canada to attend the upcoming Toronto International Festival  (TIFF) 2019, where her film ‘The Sky Is Pink’ will have its premiere. Taking to her Instagram handle, the actress shared a photo with her co-stars Akhtar, Chopra, Rohit Suresh Saraf and Saira Wasim  from the sets.
“On my way to @tiff_net  today. Can’t wait for the rest of the team to join me for the premiere on the 13th. So excited for the amazing early reviews & to share this with the world! #TheSkylsPink,”  Priyanka captioned the photo.
Interestingly, Priyanka tagged Zaira in the post along with the rest of the cast and the director. It would be interesting to see if Zaira does attend the premiere of what may just be her last film outing, since announcing her decision to quit the Bollywood industry. The young starlet essays one of the central characters in the film.
Directed by Shonali Bose, the film is based on the life of Aisha chaudhary., who became a motivational speaker after being diagnosed with pulmonary fibrosis, an immune deficiency order at the age of 13. It also highlights the love story of her parents, played by Priyanka and Farhan.
‘The Sky is Pink”marks Priyanka’s Bollywood comeback after a long break of about 3 years.