Home Gossips This how Jhanvi Kapoor spending her quarantined time 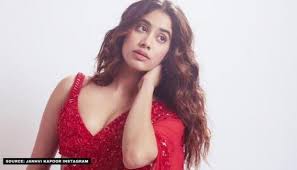 Bollywood actress Jhanvi Kapoor is very popular among youngsters and she keeps updating her fans about her life through her social media account. The actress is spending her quarantine days with her sister Khushi Kapoor who flew back from US after coronavirus outbreak.

In her Instagram stories, the actress shared a scene of Madhubala and Guru Dutt from the 1955 film Mr and Mrs ’55, the actress wrote, “I love them so much help me (with crying emojis)”. Looks like the star is binging on old retro films with her family members.
In her interviews, she always revealed her love for old movies and sometime jokingly said that she think she was born in wrong era. Jhanvi made her acting debut in 2018 with the romantic drama film ‘Dhadak’, co-starring Ishaan Khatter. A Hindi-language remake of the 2016 Marathi film ‘Sairat’, it featured her as a young upper-class girl whose life turns tragic after she elopes with a lower-class boy (played by Khatter).
Recently, she made her digital debut with Zoya Akhtar’s ‘Ghost stories’ on Netflix. Meanwhile, on the work front, she will be next seen in the biopic film ‘Gunjan Saxena – The Kargil Girl’ which is  going to be released on 24th April 2020. Before lockdown, Jhanvi was busy in the shoot of her other 2020 release ‘Dostana 2’. She was also preparing for her upcoming multi starrer project ‘Takht’.

Deepika Padukone Posts Throwback Pics of Herself as a Baby, Fans Ask if She’s...