Filmmaker Punit Malhotra, who worked with Tiger Shroff in Student of the Year 2, has directed the music video with choreography by Paresh.

Actor Tiger Shroff on Monday announced that he is making his singing debut with upcoming track “Unbelievable”. The 30-year-old actor shared the news on Instagram, while posting the motion poster for the track.

“Always wanted to sing and dance to my own song, but never really had the courage to take it forward. Spent a lot of time exploring and working this lockdown and discovered something new,” Tiger said.

“Its been an ‘unbelievable’ experience, and i’m excited to share this humble effort with you soon #YouAreUnbelievable #TeaserOutSoon” he added.

Produced by Big Bang Music, the track has been penned by DG Mayne and Avitesh, with Tiger lending the vocals.

Filmmaker Punit Malhotra, who worked with Tiger in Student of the Year 2, has directed the music video with choreography by Paresh.

On the acting front, Tiger was most recently seen in Baaghi 3, which released countrywide in March this year. 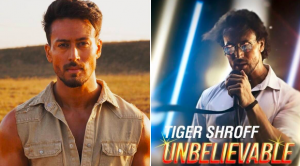