The official trailer for the film was published today, June 14th, by the film’s producers. Deepika Singh plays Mosmi, a middle-class autonomous girl who works for the government and lives life on her own grounds in the roughly 2.5-minute clip. She is her parents’ sole child and has also aided them financially. Tushar sharma, on the other hand, plays Titu, a character whose hopes and dreams are based on his actions, and who seeks out the quickest means to reach his objectives. Despite his debt-ridden life, he dreams of none other than Ambani. Both played lovers in the film who intended to get married to each other and they eventually did, but the trouble doesn’t end there because Titu’s decisions jeopardised their marriage. The film is a basic love love tale with middle class family drama that uses humour to express some serious issues. Well further anything in regard to the movie is under the wraps. 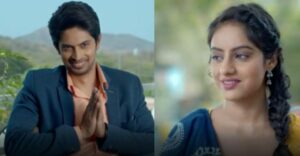 Titu Ambani is an upcoming Hindi romance comedy drama film helmed and presented by Rohit Raj Goyal and will be released next month. For his direction in Diya Aur Baati Hum, which aired on Star Plus ,Goyal won the ITA Award for Best Director – Drama.The film’s dialogues are written by Abhishek Manoharchanda, and it is produced by Dinesh Kumar and Mahendra Vijaydan Detha under the name of Sabal Productions. The art director is Akash Jaiswal. Other team members are Sushil Vishwakarma as cinematographer, Sanjay Shama as editor, and Prabhat Thakur as production designer for the film. Bharat Menaria and Hitarth Bhatt, collectively known as Bharat-Hitarth, composed the film’s music and background score. Mayur Puri, the film’s lyricist, makes his comeback after a four-year. The film’s producers have also disclosed its release date, and it has officially been confirmed that the picture will be released in theatres on July 8, 2022. So make a note of the date and go see the film in one of your local theatres. The film marks the debut of TV actress Deepika Singh.