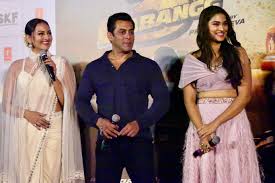 Actress saiee manjerkar who is going to do her debut in Salman khans movie Dabangg 3 is seen getting jealous of Sonakshi Sinha when the former found Sonakshi and Salman taking a close picture together.

News is in the air because of a video released of the movie Dabangg 3’s premiere night. actors such as sunny leone, Ritesh Deshmukh  Shatrughan Sinha were also seen attending the premier.

Movie Dabangg 3 is a prequel of the original movie Dabangg in which the story would be shown in rewind. the story is directed by Prabhu Deva and produced by Salman and Arbaaz Khan under the banner Salman khan films.

In the movie, renowned actress Sonakshi Sinha would be seen opposite Salman Khan in the main lead and, beautiful actress saiee manjerkar daughter of Mahesh manjerkar would be seen doing her debut.

The film released today and is expected to d wonder as other movies of Salman khan.