Since its first poster was unveiled last weekend, the Ranbir Kapoor, Sanjay Dutt, and Vaani Kapoor-starring film “Shamshera” has received positive reviews. The film’s adrenaline-pumping teaser was presented by the producers ahead of its July 22, 2022, IMAX release in Hindi, Tamil, and Telugu. The movie, which is being helmed by Karan Malhotra, is eagerly awaited because it is Ranbir’s first movie appearance in four years following “Sanju.” One of the newest jodis to appear on screen in 2022 is Vaani and Ranbir, and the actress says her part “plays a significant role in establishing the narrative” of “Shamshera.” 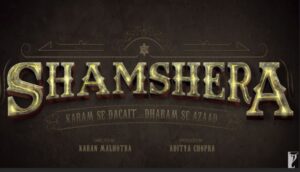 The glimpse of Vaani’s character was unveiled today by the makers and it is a must that that she looks fabulous and appealing in the poster. Sona has a strong will, is self-assured and a go-getter, but she also has her own emotional vulnerabilities, according to Vaani, who describes her character.” She’s undoubtedly one of the most energising roles I’ve ever portrayed. Working with the talent powerhouse and Ranbir Kapoor is great for me. He is unquestionably a unique actor, and my personal favourite” Vaani cited. The action of “Shamshera” takes place in the crafted town of Kaza, where a brutal authoritarian commander named Shudh Singh imprisons, enslaves, and tortures a warrior tribe. This is the tale of a guy who was sold into slavery, who later rose to leadership positions and became a legend among his community. He never stops fighting for the independence and honour of his tribe. Shamshera is his name.The action-packed, heart-pounding tale belongs to 1800s in the centre of India. The actor who plays Shamshera in the movie, Ranbir Kapoor, has a lot to give out from this project. In this remarkable casting choice, Sanjay Dutt plays Ranbir’s arch-enemy. Their confrontation will be one to watch out for as they will viciously pursue one another without mercy.