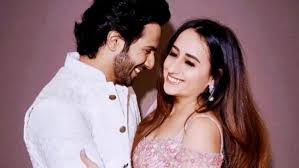 Varun Dhawan and Natasha Dalal have been very open about their romance and the couple was rumoured to tie the knot this year. As Varun celebrates his birthday today with his family during lockdown, a big announcement was being planned.

According to a news portal, Varun’s family was planning to formally announce Varun’s engagement to Natasha Dalal on his birthday but going by the current scenario, they have dropped to plan. The couple has reportedly decided to tie the knot in a glamorous destination wedding.

Varun Dhawan will celebrate his 33 rd birthday with his parents David-Lali as well as his brother Rohit and family who reside a few floors above Varun’s residence in the same Juhu highrise.

Interestingly, Varun’s next film is directed by his father. ‘Coolie No 1’ features Varun romancing Sara Ali Khan. The comedy entertainer was scheduled to hit the screens on May 1, however the makers will take a call once the lockdown ends.

Celebs who are expecting babies