Bollywood actor Vicky Kaushal has once again proved himself with his upcoming movie ‘Sardar Udham’. The actor went on Instagram today to launch the trailer for the movie, and the fans cannot stop parsing Vicky’s performance in the film. Earlier, the makers had shared a glimpse of the film with a teaser, and on Thursday morning the full trailer was released.

Sardar Uddham is a biopic revolving around the life of revolutionary freedom fighter Sardar Udham Singh and covers one major instance of the freedom fighter’s life when he assassinated Michael O’Dwyer, the lieutenant governor of Punjab in Amritsar at the time of the Jallianwala Bagh massacre. 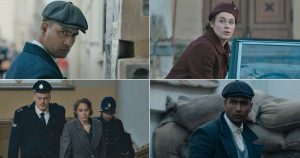 By the looks of the trailer, the movie seems promising, everything from the narration to the execution is beyond perfect. Vicky Kaushal is yet again going to surprise the audience with his impeccable performance. The movie is directed by Shoojit Sircar and is produced by Rising Sun Films and backed by Sheel Kumar and Ronnie Lahiri.

Sardar Udham is slated to premiere on Amazon Prime Video on 16th October. The movie also marks the first-ever collaboration between Vicky Kaushal and Shoojit Sircar.