Home Gossips Vidya Balan-starrer Natkhat in the race for Oscars 2021 in Best Short... Natkhat is among the three Indian short films that are aiming for a nomination at the Oscars 2021 in the Best Short Film category. Vidya Balan plays the lead role in Natkhat.

A big and good news for Indian cinephiles. Vidya Balan’sshort film Natkhat is among the Indian films that are in the race for Oscars 2021 in the Best Short Film (Live Action) category. Vidya has not only played the lead in the film, but is also one of the producers. She made her production debut with Natkhat last year. Directed by Shaan Vyas, the 33-minute film was premiered at Tribeca’s We Are One: A Global Film Festival. It even managed to win the German Star of India Award at the Indian Film Festival Stuttgart. 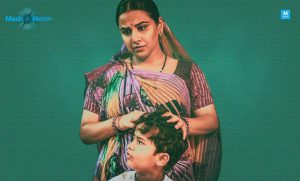 Talking about the makers of the film, they are very elated to be in oscars race. The makers of Natkhat are excited to be representing India at the Oscars stage. The official Twitter handle of RSVP Movies, one of the producers of the film, wrote, “We made #Natkhat “to reach every corner of the earth and tell the world that change begins at home.” Elated to be in the race for the Oscars 2021 short film category! (sic).” Rooting for all the Indian short films in the Oscars race, actorPriyanka Chopra took to social media to show her support. She also shared a poster of Vidya Balan’s Natkhat. Vidyathanked Priyanka and wrote, “Yoohoo Thank you so much @priyankachopra (sic).”

The other Indian short films that are in the race for Oscars include Keith Gomes’ Shameless and Tushar Tyagi’s Saving Chintu. Saurav Vishnu’s Tailing Pond is aiming for nominations in the documentary short subject category.

The short film ‘Natkhat’ revolves around a mother, played by Vidya Balan, who tries to teach her son a lesson about patriarchy and misogyny prevalent around them. The entire story unfolds through an adorable mother-son relationship. In the 33-minute short film, a mother is shown to imbibe the values of gender equality into her son when she observes that he has started leaning towards patriarchal norms just like the other men in the family. The film emphasises on the value that ‘change begins at home’.