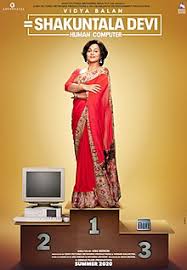 Two time national award winning actress Vidya Balan is soon to be seen on the big screen as Shakuntala Devi, a human computer. Shakuntala Devi is a biographical film directed and written by Anu Menon and produced by Sony pictures network and Vikram Malhotra . The film inculcates Vidya Balan as a mental calculator also known as the “HUMAN COMPUTER”. Shakulntala Devi was also awarded a place in Guinness book of world records , she wrote a number of books on mathematics , puzzles and astrology in her late years .

She wrote the book ‘THE WORLD OF HOMOSEXUALITY’ which is considered the first study of homosexulty in india .and she did this all without any formal education .

And now popular actress who has given Indian cinema indelible movies namely ‘Kahani’ , ‘Paa’ ,’The dirty picture ‘ and many will be seen doing justice to the role .

2020 would be a full pack year for Vidya Balan starring her in two movies in Shakuntala Devi and Mahila Mandali. The makers have finalized the release date of Shakuntala Devi on 8 May 2020.