Home Latest Buzz Virat Kohli goes on a date with Anushka Sharma: Movie with this... 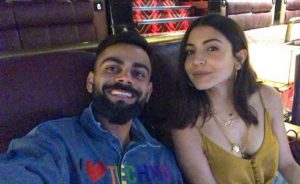 virat Kohli and Anushka Sharma can’t get enough of each other. From partying together and going on vacations to enjoying a movie date, the two are inseparable.

Recently, Virat took to Instagram to share a picture from his movie date with wife Anushka Sharma. He shared the selfie saying, “About last night. At the movies with this hottie. @anushkasharma.” Virat and Anushka’s PDA often makes it to social media. Earlier, Virat shared a throwback picture with Anushka from their trip to Bhutan. He shared the picture saying, “Walking together in the journey of life with nothing But love @anushkasharma.”

Both Virat and Anushka have high-profile careers but the two ensure to spend time with each other. Anushka often accompanies Virat on his cricket match tours. Virat too makes it a point to spend maximum time with Anushka whenever he can.

The Indian Cricket team Captain recently went to Kolkata to play the Pink Ball Test Series Against Bangladesh. Right after the series ended, Virat headed home to Mumbai to be with Anushka. 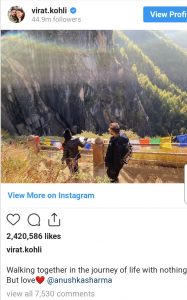 Virat and Anushka also made many headlines with adorable pictures from their trip to Bhutan.
The couple tied the knot in 2017. Anushka was last seen in 2018’s Zero. She is currently busy promoting her clothing brand.