Home Gossips Nana Patekar Said He Won’t Work With Sanjay Dutt: “That Is The... The sour relation between two veterans of Bollywood, Nana Patekar and Sanjay Dutt, isn’t hidden from anyone. It’s Nana who once pledged not to work with Baba. Usually, such fights remain under wraps and die down, but Nana is a man who loves sharing it bluntly.

So what’s the real matter? What went wrong between them? Well, the matter traces back to the time when Sanjay got in a controversy over acquiring illegal weapons from the people who were linked to the 1993 Mumbai bomb blasts. In 2007, the Vaastav actor was put in jail for 6 years after he was convicted. The actor’s links with Mumbai blasts were dismissed but he had to face prison for illegal possession of weapons. 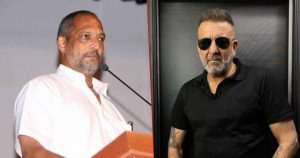 Sanjay’s involvement in such cases had irked Nana years back, but it was his conviction in charges which triggered him to be vocal. From his side, he pledged not to work with Sanjay Dutt, as a kind of punishment and protest.