Home Gossips Will Arjun Kapoor and Kartina Kaif collborate together for a project? 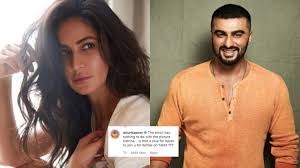 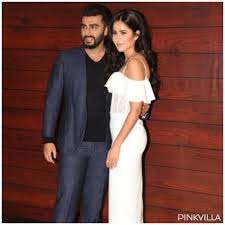 Bollywood celebrities Katrina Kaif and Arjun Kapoor never share silver screen together but they share a close bond. On social media, both actors could be seen pulling leg of each other.

Few days back, Katrina uploaded a video on her Instagram account where she was washing dishes. On that Arjun Kapoor called her Kantabahen 2.0 and Katrina also trolled him for his post. Meanwhile, their offline chemistry is loved by the audience.
Recently, in a ‘Ask Me’ sessions a fan asked his plans to work with his dear friend Katrina. On that, ‘Ishqzaade’ actor replied, “She’s the best & most sporting when it comes to me troubling her on and off Insta… working with her depends again on material and her saying YES. @katrinakaif.”
With this reply, Arjun  shared his desire to work with Katrina and also make sure that it depend on Kaif’s decision on working with him. Whereas, Katrina recently shared a still of her video chat on her Instagram handle with Varun Dhawan and Arjun Kapoor.
Meanwhile, on the work front Katrina will be next seen in Rohit Shetty’s ‘Sooryavanshi’. In the movie, she is playing love interest of Akshay Kumar. Whereas, Arjun Kapoor is also gearing up with his upcoming movie ‘Saandeep and Pinki Faraar’ opposite Parineeti Chopra.