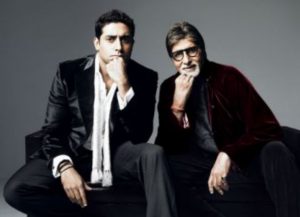 Amitabh Bachchan was your truly unconventional hero. When he made his debut with Saat Hindustani on November 7, 1969, he was brimming with innocence and an indefatigable thirst for acting. Success may have knocked his doors a little late but when it did, it never left. The man has been tirelessly working in Hindi films for five glorious decades and proven his craft time and again. His reinvention could make for a rousing master class.

Abhishek Bachchan, his son and someone who also knows what it takes to consolidate your foothold in a fickle industry, cannot stop feeling proud as his father is 50 and not out in the world of Hindi Cinema. This morning, he took to his Twitter account and shared a rare picture of the actor which we assume is from his earlier days of acting. He wrote he isn’t just paying homage to him as a son, but also as an actor and a fan. This is indeed a post straight from the heart:

He also wrote that he wants the actor to complete 50 more years in Hindi Cinema, with a hashtag- Give It Up for Bachchan. Have a look right here:

Karan Johar, who has not only worked with him but even known him personally even before he forayed into the world of movies, tweeted that Bachchan will remain the most inspiring story in the world of entertainment. He congratulated Abhishek for being a proud son. Have a look:

Age hasn’t caught up with him as yet. The man continues to handle as many as four films simultaneously. These include titles like Chehre, Brahmastra, Jhund and Gulabo Sitabo. Actors may come and actors may go, but Amitabh Bachchan is immortal, as his iconic dialogue from Shahenshah goes- he’s truly the Baap of all! admin November 7, 2019
Previous Article Malaika Arora looks beautiful in her traditional avatar as she visits the Golden Temple in Amritsar
Next Article Ayushmann Khurrana reveals he’s a big fan of Aamir Khan: Met him on sets of Dangal